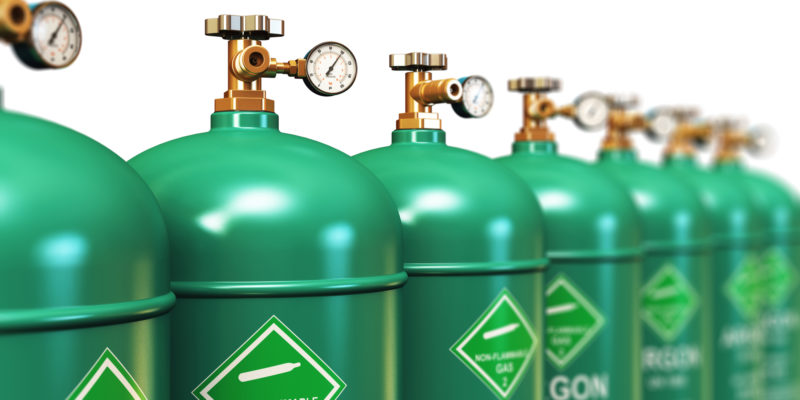 If you’re keen to have a house that is energy-efficient, cheap to run and aesthetically pleasing, one design aspect you will need to tackle is your windows. The insulation in a house is only ever as good as its weakest spot, and for most houses the windows are the weakest spot of all.  Large panes of glass are the perfect surface for letting warm air flood out and cold air seep in.

Double glazing is one highly effective way of tackling these heat loss holes.

With double glazed glass, two panes are sandwiched together which creates twice as much surface area for the air to pass through. But doubling the surface area is not the only way to optimise the benefit of double glazing – that thin gap between panes in modern double-glazed units can also be pumped with an insulating layer of gas.

Originally, this gas would have simply been air, but these days noble gases such as argon, krypton and xenon are usually used. These gases are heavier than air, meaning that heat is transferred through them much more slowly. Odourless and non-toxic, these gases are excellent insulators and add a much-needed efficiency boost to any window.

As mentioned, there are three gases commonly used for this purpose: argon, krypton and xenon. Each has its own benefits and drawbacks and choosing between them can seem complicated.

So, here’s a quick rundown of the qualities each of these choices have, to help you decide which gas best suits your windows.

Your first option is Argon. This is the most commonly used gas in double glazing, possibly because it is the third most abundant gas in the world. In fact, it makes up nearly one percent of the earth’s natural atmosphere.

Are Argon windows worth it?

Argon is the industry standard for filling double glazing because of its ratio of cost to impact. In our opinion, argon windows are definitely worth it.

Despite being the least expensive of the gases available, including it in double glazing will significantly lower the U-Value of any window. Being around 35% less conductive than regular air, argon can increase the energy efficiency of a window by anything up to 30%.

Another, less recognised benefit of argon windows is their improved soundproofing ability. They are also less prone to clouding (interior condensation) because argon has less moisture in it than air.

How long do Argon windows last?

As well as being an effective and inexpensive choice by comparison to other gases, argon windows are also a durable choice. Fitted correctly, an argon filling should last for the entire lifetime of a window – no more than 5% of the argon gas should be lost over 25 years.

How do Argon filled windows work?

As with all noble gas filled windows, argon windows work because the gas held between the panels is denser than air. This means that less heat is transferred through them and lost to the outside. It also means that, in summer, less heat is absorbed into the room which is a blessing when temperatures turn tropical outside!

A slightly less popular option for double glazing is to fill it with krypton gas. This gas is denser than argon, which means it is even more insulating and energy-efficient. This efficiency does come at a cost though, and it is a significant step-up in price from argon.

Why is Krypton gas used in windows?

As we mentioned above, Krypton is used because it is so much denser than air, and highly energy efficient.

It is particularly well-suited to triple-glazed glass. This is because it works best in gaps between panes that are around ⅜ of an inch. In bigger gaps, it can lower energy performance because convection channels can form which can actually help the heat move between the panes rather than stop it!

Are Krypton windows worth it?

In certain circumstances, krypton can definitely be worth it. In particular with an older property, that was built to accommodate a single pane window system. This usually means a much smaller window space.

Argon works best in wider windows that have gaps of up to ½ inch between panes. This could prove too thick for a narrow window in a period property, but that would be perfectly suited to thinner, Krypton-filled panes.

Is Krypton gas better than Argon?

The choice between Krypton and Argon is best left to the individual as all circumstances and requirements are different. This is because it is that much more expensive, and the increased level of performance is usually nominal, particularly in small-scale or residential buildings.

One of the newest and most specialised gas-filling options is xenon. This gas is quite the “cutting edge” when it comes to building innovation and an impressive insulator.

Why use Xenon in windows?

If you are looking to install an exterior glass wall, or multiple panes of glass in a large commercial building for example, its performance potential make it your best choice when it comes to heat-loss prevention. As the gas it much heavier than the two previously mentioned, it’s even harder for heat to escape.

This higher level of performance means that yes, xenon windows are considerably more expensive than other options. Though, over time the heightened level of performance does mean that your heating bills will be lower as a result – weighing up where you’ll benefit most is the key when it comes to buying xenon-filled windows.

Are xenon windows worth it?

There is an old adage about getting what you pay for and, with xenon, you get absolute premium performance. Problem is, you rarely need performance that high.

Installing xenon windows in a residential property is akin to buying an Aston Martin car and only using it once a week to pop to the shops. If you really wish to splash your cash, the investment might appeal but, for most, the extra expense just isn’t necessary.

We hope this post has shed some light on the mechanics of double-glazed windows, and how every feature of your window should be considered before you commit to a new set. 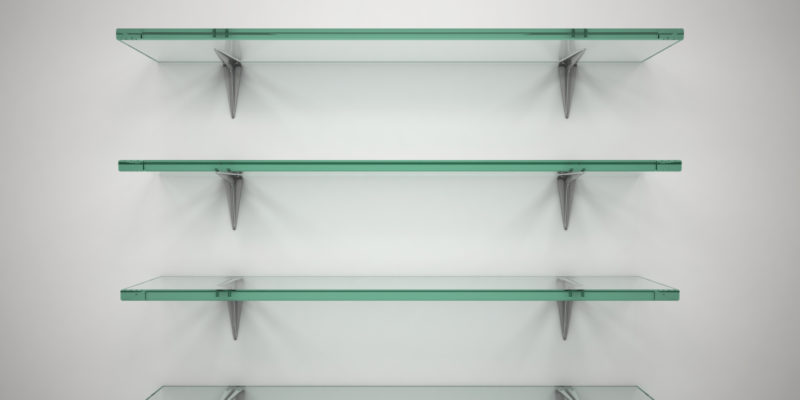 If you are looking for storage that makes a clean, clear style statement, you’re probably considering glass shelves.

As stylish as they are practical, glass shelving units can be as much of a design decision as a storage solution. They maximise the space and light in a room, while still giving a sturdy, supportive surface to show off your belongings.

Unfortunately, wood often seems the safer, simpler option but this is rarely actually the case. So, we’ve put together a handy guide to glass shelving units, tackling some of the most common queries people ask.

When creating bespoke glass shelves, it is always best to use glass that has been toughened or ‘tempered’.

In order to temper glass, it is heated to an intense heat then rapidly cooled by subjecting it to blasts of cold air. This process puts the inner layers of the glass under a higher level of stress than the outer layers. This makes it a lot stronger: in fact, tempered glass can be up to 4x as tough as untreated glass.

Tempered glass is also safer, because it breaks differently. It shatters completely into crumb like pieces with no sharp edges or shards.

How thick do glass shelves need to be?

There is no specific thickness that glass shelves need to be: it all depends on how much weight you want them to hold.

As a minimum, tempered glass shelves should be at least 4mm thick. This is fine for bathroom or other low usage shelves, that won’t need to hold more than a couple of shampoo bottles or a mug for your toothbrush.

For most purposes 8 or 10mm are a better bet. These can support heavier loads, but aren’t too costly.

Can glass shelves be recycled?

Tempered glass can be difficult to recycle. It has a different chemical make-up to untreated glass, which gives it a higher melting point. The recycling process for glass involves melting it all down, so if tempered glass is mixed in with untreated glass, you can be left with semi-solid globules of glass amongst the melted liquid.

You may be able to find specialists who can take tempered glass, but you can’t just chuck it  in your usual council recycling bin when you’ve finished with it.

How do you install glass shelves?

Installing glass floating shelves is not a complicated task. If you are fixing them to a wall, use anchors to secure them. These will include a ‘clamp’ section to fit around the surface of the shelf.

Specially designed wall anchors will help make your shelving secure, as well as preventing damage to the surface of your shelves. You will need sufficient anchors for the length and width of your individual shelves.

As long as the glass has been tempered, there is no reason for glass shelves to be unable to hold books. It is all dependent on the thickness of the glass you use and how many brackets you use to secure the shelves to the wall.

How are glass shelves measured?

Like most DIY items, glass shelves can be measured in inches or in millimetres.  These units can be applied to the length, thickness or depths of the shelves though obviously millimetres allow for the most amount of specificity.

Most manufacturers will offer glass shelves made to measure, allowing you to specify exactly what length and depth you want, and giving you glass shelving cut to size.

How do you attach a glass shelf to a mirror?

If you are looking for stylish storage options, few things beat a glass shelf/mirror combination. It’s all clean lines and reflected light!

For thinner shelves, like lightweight glass bathroom shelves, your best option is to bond the shelve straight on the mirror. This gives a great, clean, finish, but you will be limited on the load you can place on the shelf.

Alternatively, you can use brackets for glass shelving. These give you more flexibility on what you can put on the shelf but it can be a fiddly process that damages the mirror if done incorrectly. It’s best to get these attached by a professional.

How much weight can a glass shelf hold?

Throughout this FAQ we’ve discussed the different factors that affect how much weight a glass shelf can hold. If you need more guidance, there are plenty of weight load calculators online that can give you specific details.

How long can a glass shelf be?

Technically, there are no more limits on the length of glass shelving units than there is on wooden ones. Just remember that the longer the shelves are, you will need more brackets to keep them sturdy. For really long shelves, you may even need to consider thicker glass.

Can glass shelving be painted?

It is definitely possible to get a painted finish on glass shelving, that is glossy and durable. Thing is, we think the main attraction of glass is their light and space enhancing clarity, and a layer of paint can ruin that.

Instead, if you’re looking for ways to make your shelves more unique, why not consider getting them sandblasted or tinted. Smoky grey or black glass shelves could add depth to a room without completely sacrificing the transparency of the surface.

The clean cut lines of glass shelving can turn a practical necessity into a design feature. We hope this post has demonstrated how durable, how practical, glass shelves are, while also being the most attractive, modern choice.